I took a day off yesterday and went to the lake with friends. When I returned to Berlin in the afternoon, I met N and mini-me on a playground in the area. We drank Kefir and Apfelschorle, snacked on fresh blueberries and waffles and felt very happy. Mini-me has been a bit unpredictable for leisure time fun lately, sometimes he hates everything and sometimes he loves it all. When you bike 45 minutes to a water sprinkler for kids that’s actually open and any splash of water makes your kid cry for ten minutes, that sucks. Especially when the day before, you spent all day at the pool and kid was happier than ever before. Yesterday he was super happy, jumping around in the puddles from the water fountain, feeding a super cute baby we had just met with blueberries for 30 minutes straight, throwing his ball around, sharing his toys happily with the rest of the kids and laughing dirty and satisfied as if he had never been grumpy, ever before.

We were all barefoot to cool down our feet from the heat and ran around. What a beautiful day. Until mini-me started crying at some point because he had stepped on a stone in the grass. I picked him up and checked his foot, all good. We were running towards the slide when I stopped from a sudden, sharp pain in my own foot. At first glance, I couldn’t locate what prickled, so I let mini-me run and checked the sand around me. I was surprised when I saw a needle sticking out of the sand and pulled it out, dropping it the very second I could recognize what it was (of course we picked it up later, so no one else could get hurt). I had stepped on the needle of a used junkie’s syringe, filthy, gross and slightly bent.

Now, the first shock I had is still echoing around my body. I had heard of people finding needles on playgrounds (or streets, parks, you know), but never of anyone who got hurt by one… After research and consultation I have come to the conclusion that the actual risk of infection is pretty much down to zero just a minute after that needle was used, and this one must have been laying in the heat for at least 12 hours, most likely a few days. I still had pain in my toe all night, which I mainly associate with the shock, not the actual wound (because to be honest, it’s barely there).

I do get that a junkie won’t think of consequences for him or the rest of the world the moment after shooting up. But leaving dirty needles on a playground (or anywhere else but in a safe trash can!) is just really shit. Even with no serious risk of contagion with HIV, Hepatitis or anything else, this is insane. My trust into good is a bit bruised, but I still want to try to stay as relaxed as I can. Though I am sure there are hundreds of syringes on Berlin playgrounds, parks and woods, so please make sure to be careful and keep your eyes open. And when you see one, don’t turn around, but get rid of it in a safe place. I am not sure if I would have found the needle if mini-me might have stepped on it instead of me (damn, not sure if I were still this calm, to be honest). Mini-me often says aua-aua ouch-ouch just to catch my attention, and even when he really hurts himself he usually calms down the second I (or N) come to help him up. He doesn’t have any corneal on his tiny, chunky feet so far, so he could have injured himself much more than I did. Plus, he might have confused that syringe with a very exciting toy.

I am evaluating how to teach him so he won’t touch stuff alike, to be careful and suspicious about unknown objects lying around and to come tell me when he finds something unknown in the sand. But at the same time I don’t want to scare him, or panic. He is so open-minded and brave and I don’t want to poison his curiosity. 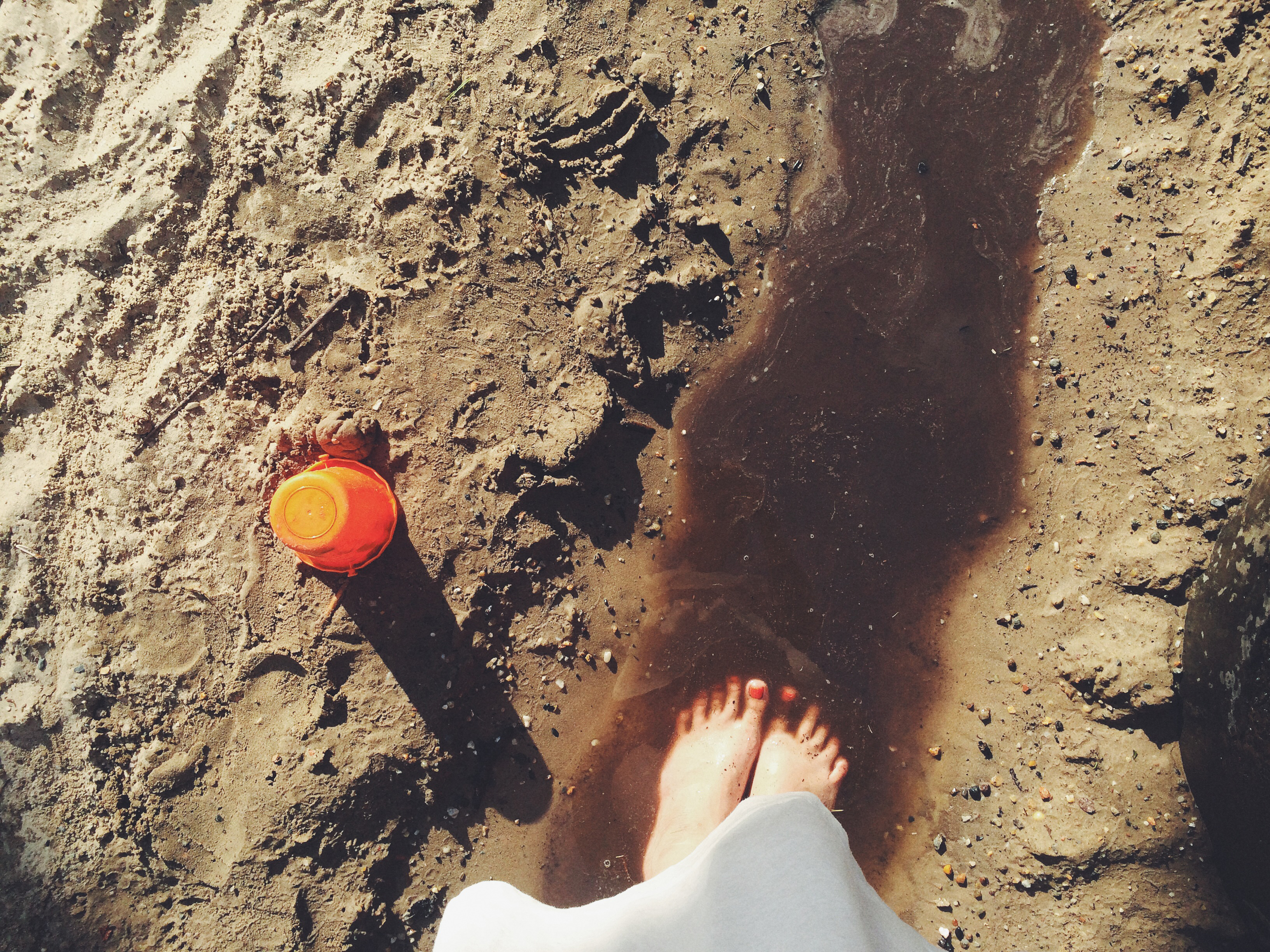 I took this photo only minutes before stepping on a dirty syringe on a seemingly clean playground in Kreuzberg yesterday.